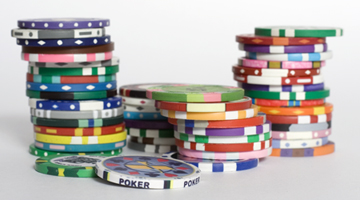 (Caption: there are endless different types of casino chip, but some are worth significantly more than others)

For anyone visiting a casino, the most valuable chip is either the one that wins you the most, or the last chip you have to play with before you go bust for the night and have to go home. However, as all collectors know, chips can be worth a lot more than their face value, or even their emotional value on the night. Some bespoke crafted or extremely rare chips can even be worth hundreds of thousands of dollars. There have been some amazing, record breaking casino chips down the years. Some break records with their extreme rarity, while others are designed to be the best, with jewel encrusted decoration that takes chip design to a whole new level of luxury living. Let’s take a closer look at some of the world’s record breaking chips.

The most valuable chip ever made

Legend has it that the ill-fated London casino, the Aladdin Resort, created a $10 million gaming chip for their highest rollers. Sadly, the casino did not last long and outside of its walls the chip itself has only collectors’ value, which is a long way short of its original multi-million dollar price tag. For the most valuable chip in the world, you have to look to Canadian jeweller Gerry Lewy. Lewy’s record-breaking casino chip is a work of art, made from pure gold and encrusted with hundreds of dazzling diamonds. It took two and a half years to make and consists of an incredible array of gemstones. The chip’s disc is crafted from 4.8oz (136g) of 22 karat pink gold and there are no less than seventeen one carat diamonds around the rim. And that’s just the start! Each side of the chip is also encrusted with diamonds with the raised number seven on one side and the number eight on the other, each formed with over sixty small round white diamonds totalling 2.5 carats. These are surrounded by hundreds of pink diamonds totalling 5.13 carats forming the background. Lewy was inspired to make his amazing creation when he saw how plain an ordinary casino chips was. “There’s something wrong with this,” he said. “It has no flair. It’s boring.” There’s certainly nothing boring about the chip he made, which has so much flair that it has been valued at a cool $450,000, earning him a Guinness World Record.

The most valuable chip set

If you like your chips set with gemstones, then the Geoffrey Parker Poker Set is one for you. Or at least it would be if you had $7.5 million to spare. The luxury set comes in an alligator skin case and each individual chip in the set is encrusted with sparkling jewels. To win these dazzling discs, you play your poker with platinum plated playing cards, each of which is probably worth more than your car! The sets are custom built to order and you can choose clay, silver, 9 or 18 carat gold chips, embellished with Swarovski crystals or genuine diamonds. You can even choose the colour and finish of the alligator skin case, or you can opt for Shagreen (Stingray skin) to make your set truly one of a kind.

Both of the record holders described above were created especially to break records, but there are also some ordinary casino chips that have become record breakers thanks to their history and heritage. Perhaps the most valuable of these is one which captures all the romance and history of the early days of American casinos, when the likes of Bugsy Siegel ran the business for the Mob. A 1947 chip from Bugsy’s ground-breaking, but ultimately doomed, Flamingo casino is thought to be worth tens of thousands of dollars.

Rarity can also be a major factor in creating record breaking prices. The only known example of a $5 chip from the single blackjack table at the Golden Goose in Las Vegas in the late 70s recently sold for $75,000. One of only two known examples of a $5 chip from the nearby Lucky Casino in the late 60s also sold for $52,500 at the same collectors’ auction. Whether you choose artistry or history, the world of record-breaking casino chips is a fascinating one. Sadly, it is also one that most collectors can only dream of entering into, unless they have a time-machine or a lottery win. That said, if casino chips are made of anything, they are made of dreams.